An installation for Brighton Festival, commissioned by Home Live Art.

A ticking piano and the female body: the pressure of time passing.

Home Live Art filled the stunning Regency Angel House on Brighton’s seafront for Brighton Festival 2017, with works by Johnny Fluffypunk, the Boy Stitchers, Seth Kriebel, Me and the Machine, all hosted by Richard Layzell. I created the installation ‘Body Clock’.

This was an automated swinging of my piano, with an enormous motor made and programmed by Felix Thorn’s (Felix’s Machines) company Tenhertz.

A vertical grand piano swings perpetually from side to side, like a giant metronome marking time.  A near-immovable piece of furniture rendered weightless. Sparked by the internal ticking of her own call to motherhood, BODY CLOCK by Sarah Nicolls is a contemplation on the perpetual motion of our inner cycles.  Found in the Drawing Room at Angel House, this monumental instrument moves fluidly and hypnotically: a sonic sculpture-come-installation, intended to let visitors take time to think about time.

When I was 37 and preparing for the leap into trying for a baby, I read a lighthearted Guardian article by a single woman in her 30s.  She observed that every time an eligible man approached her, they were probably put off when they got close to her by the very loud ticking coming from within her.  She was referring, of course, to the internal ticking of broodiness.  I thought that was hilarious and I could totally relate. In my late 30s, I became frankly slightly manic, feeling I needed to GET ON WITH IT!!  After all, why wait and have increased risk of this or that for the baby?  For me, broodiness wasn’t suddenly thinking that all babies were really cute.  (I did always have a soft spot for kid’s shoes but now I realise that babies don’t wear shoes!). It was partly that I wanted to create offspring with my man – that did feel romantic as an idea – but it was also a feeling of ‘right, well, it’s now or never and I’ll probably regret never, so better go for NOW!’). Often we’re made to think that women should feel totally pre-programmed to love all babies when for me this just wasn’t the case.

So, I related to this manic-ness and could hear my own ticking.  When I got this piano returned to me as a ticking, swinging piano it immediately made me think of the surprise of having kids – the fact that we conceive (literally) of something but really we have no idea how it’ll be until it’s there, in the flesh.

Then I realized the piano on its own could be my body, my ticking, as well as the perpetual motion of motherhood, growth, life, pulsing, and that rocking that all mums do, even if they’re not holding a baby sometimes (I have rocked an empty pram a few times…).

Now I’m trying to conceive of a moving sound sculpture which somehow conveys this feeling of time passing, the rhythms of life, the cycles of production and perhaps our own sense of mortality.  Hopefully I’ll get somewhere close!

“We repair to the calm of the Regency Room, where Sarah Nicolls is playing extracts from her show Body Clock on her swinging grand piano. The composition is reflective, melodic, delicate and twisty as glass balls twang the strings and hidden microphones amplify knocks. She plays us out, but not before Anton gives a final address, mixing a potted history of the building with a reflection on our time in it; ‘Here we are. Nice to stay. More people like you coming later. Not like you. You are the ones.’ “ 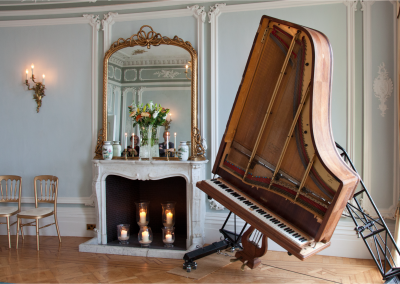 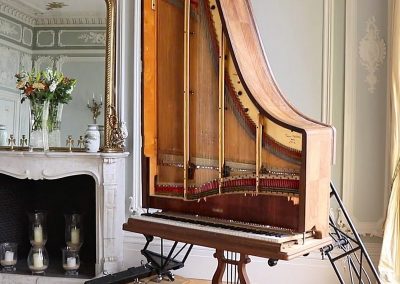 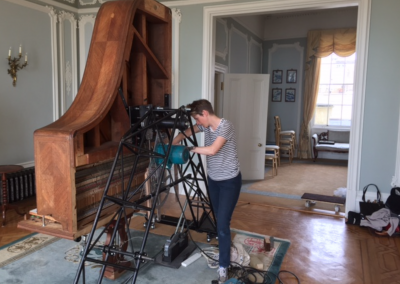 This work was commissioned by Home Live Art and was premiered at Brighton Festival 2017.